T minus 7 : KHB Ready for Take Off

The 20th Danny Boy Jazz & Blues Festival launches next Thursday at 7.30pm.  If you can’t wait a full 7 days, our Curtain Raiser gets things warmed up on Wednesday night at the R.V.A.C.C. 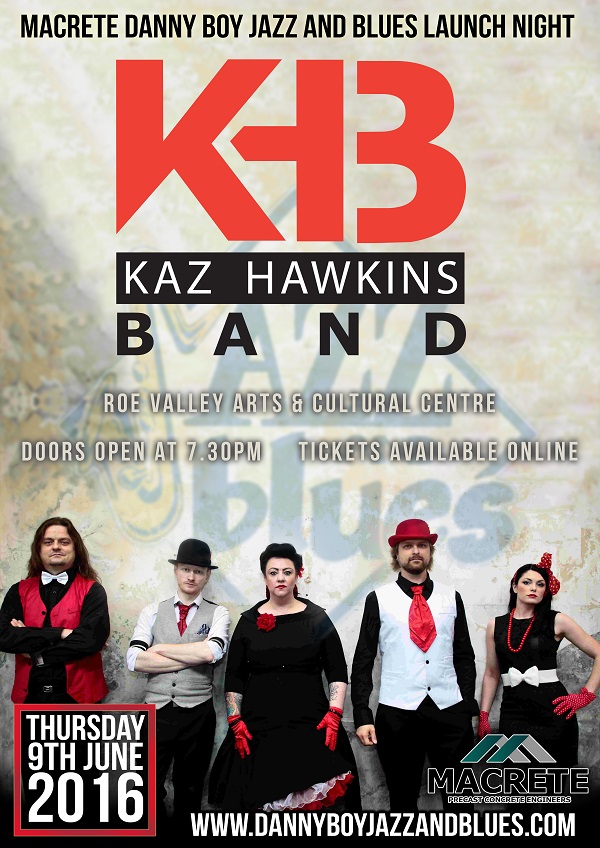 The fabulous Kaz Hawkins Band will be launching our great wee festival this year at the RVACC on Thursday 9th June, at the Roe Valley Arts & Cultural Centre.  We like to kick things off with a big bang and boy-o-boy we’ve hit the jackpot this year…

A Handful of Tickets still available ONLINE ONLY

Multi award winning Kaz Hawkins is Northern Ireland’s very own blues and soul darling. The Belfast born singer-songwriter is fast becoming a performing icon across UK & Europe with the United States temptingly beckoning her over.   Her high energy, original shows with her 1950s style swing-dress-meets-Dr Martens look and ability to closely connect with her public contribute to make Kaz one of today’s most popular blues artists in the UK and Ireland, as she continues to play to full houses.

Kaz has now rebranded full time as KAZ HAWKINS BAND and with the addition of another vocalist, Deanne Jones, the band sound is evolving bigger and better than ever before. Guitarist Nick McConkey has been with Kaz 4 years and has been a crucial part of the bands direction. With the addition in 2015 of brothers Pete & Jan Uhrin on drums and bass, KHB as they are now known, released their Feelin’ Good album and UK tour on 28th May at Belfast Empire Music Hall.

Kaz has worked tirelessly for different charities and is Arts Ambassador for EastSide Arts Belfast in which she lectured students at Boston University on how she used music to survive trauma.