Jazz Gazette – Definitely worth a read! 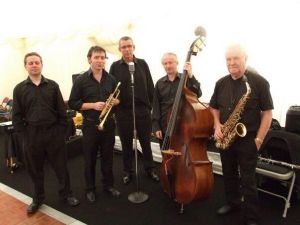 Jazz Gazette were formed  in the mid 80’s.
The present  line up includes
Mark Bradley trumpet,
IM McDermott Sax,
Gerard Bradley Piano,
Peter Doherty Bass
Aidan Dunphy Drums.
During the 1980’s they brought the sound of Jazz to Strabane and Letterkenny. Although they have since gigged the length and breadth of
Ireland they originally had residencys in the Fir Trees Hotel Strabane and were frequently heard in McGinley’s Letterkenny and The Bridge Bar Ramelton.
Over recent years all the boys  have been gigging regularly with various jazz combos. They have also all played in the ‘Rat Pack’ orchestra which included sell out performances in Ireland’s major venues. This led to a successful spell in Belfast where for the past three years the lads have been the mainstay of
the’ Martin John Simply Swing Big Band’ .This summer the lads are also performing at both Derry and Doonbeg jazz festivals,  doing weddings and are receiving rave reviews for their eclectic mix of accessible swing music.
They also will during July-Sept 2015, perform their usual Jazz residency at the Alley Theatre Strabane.