Danny Boy is without doubt one of the world’s best known and best loved songs.  As such, it is also the subject of sometimes heated debate about who first played it, who first wrote it, and what side they played for.  So much so that it was the subject of a recent BBC documentary investigating it’s story.

Regardless of the ongoing arguments, one common thread that all Limavady inhabitants will claim, is that this song, which is now known worldwide, and has been performed by just about every heavyweight singer and band over several generations, originated in “Our Wee Town”.

What is undisputed, is that Danny Boy transcends religion, politics and musical genres across the world, so irrespective of it’s true origins, the beauty of this fusion of its melody and lyrics is what should be celebrated.

There are a number of commonly referenced characters who feature in “The Danny Boy Story”, who will no doubt be cross examined, should the truth of the story ever be subject to the courts of the land.  And let’s face it, stranger things have happened in Norn Iron…

In this light hearted look at the “evidence”, where does your allegiance lie ?!

Acknowledgement and thanks to Ulster Ancestry for some of the contents below.

Jimmy was born in the flatlands of Myroe County Londonderry and his favourite spot for playing the fiddle on market days was outside the Burns & Laird Shipping Office in Limavady. It was customary for the farmers of the day to bring their produce to the Limavady market by horse and cart. After they had unyoked their horses they left their carts with shafts on the ground all lined up along the Main Street.  Jimmy usually took up position between the shafts of one of these carts just opposite the home of Jane Ross, who lived at 51 Main Street. 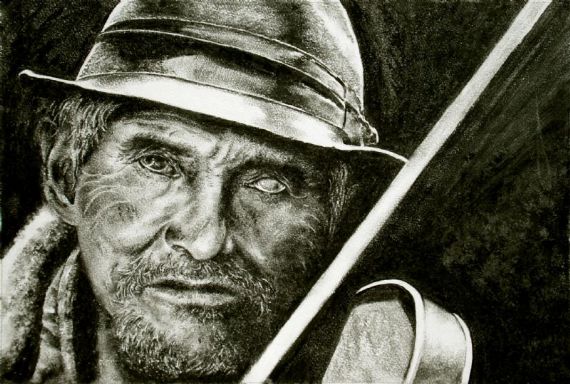 Tradition has it that the McCurrys came from Islay in Scotland. Jimmy’s father, John, used to visit Ballycastle regularly from his home in Portnahaven, which had close links with Ireland. On one of his trips he met a girl whom he later married. The family settled in Ballycastle but later moved to Myroe, where blind Jimmy was born in 1830. Jimmy was part of a long fiddle playing tradition for the McCurrys had once been the bards to the Lords of the Isles, who ruled their Kingdom from Islay.

Several of Jimmy’s songs have survived to the present day. Amongst these are “The Maid of Carrowclare”, “The Coleraine Regatta”, “Sarah Jane”, and “The Star of Moville”.  Jimmy’s health deteriorated in his later years and he was eventually admitted to the Limavady Workhouse. It was from here that the blind fiddler’s remains were carried to the graveyard at Tamlaghtfinlagan Parish Church, Ballykelly, in 1910. The whole of the community is said to have mourned his death.

Jane Ross, like Jimmy, had Scottish ancestors. She was the daughter of John Ross (1778-1830), an old established family in the Roe Valley and a direct descendant of John Rosse, who had been granted lands in the area in 1609 during the Plantation of Ulster, when English and Scottish planters were brought over to settle in the lands confiscated from the O’Cahans.

Jane Ross (1810-1879) stated that she had taken down the tune in Limavady in 1851 when she heard it played by an itinerant fiddler. One of Ireland’s most distinguished folk song collectors, Sam Henry, states in “Songs of the People” a regular weekly feature in the Northern Constitution (1923- 1939), that blind Jimmy McCurry (1830-19 10) was the fiddler referred to by Jane Ross. 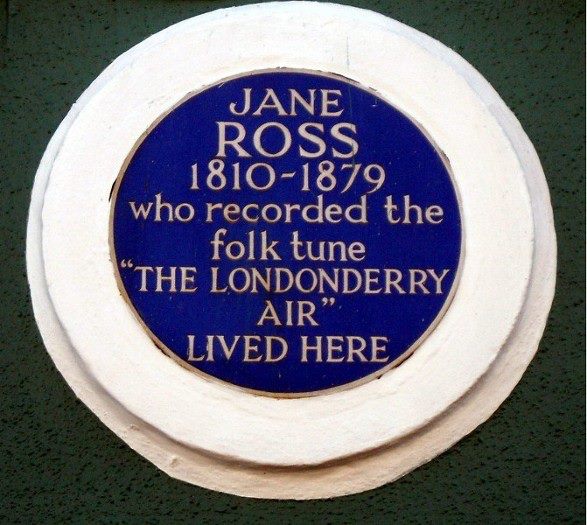 There is strong oral evidence in the Roe Valley to support this version of the event. The following story of the transmission of the air, appears in The Blind Fiddler from Myroe (1997), related to me in 1996 by Wallace McCurry, a descendant of the blind fiddler:

One day Jane Ross heard Jimmy playing a beautiful melody outside the Burns & Laird Shipping Office, which she had never heard before. She came over to Jimmy and asked him to play the tune over and over again until she had taken down every note. Jane thanked him and gave him a coin for his moving rendition of the tune. When she departed Jimmy rubbed it against his lips, as was his method of determining the denomination of coins, and discovered it was a florin instead of the customary penny. He set off in pursuit of Jane and when he caught up with her he told her that she had made a mistake. Jane refused to take it back and asked him to keep it as a token of her appreciation of his music.

The confiscation of the O’Cahan lands was to enrage the blind harper Rory Dall O’Cahan (c1550-166O), a chieftain of the clan, for he and his people had a deep attachment to the land, where the O’Cahans had lived for generations.  Rory Dall O’Cahan composed a tune of such pain and passion that it would eventually touch the hearts of people worldwide. The tune became known as “O’Cahan’s Lament”. 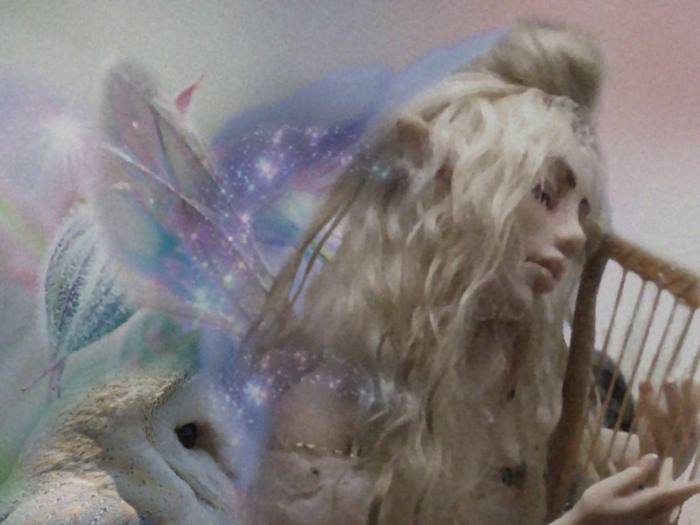 There are those who say that Rory Dall had some assistance in writing the lament. A story is told that he had too much to drink one evening. He left his castle on the banks of the Roe, staggered along the riverside and eventually collapsed in a hollow. The servants at the castle, who were sent to bring him back, were attracted by the sound of his harp in the distance. When they found Rory Dall he was lying unconscious but mysterious invisible fingers were playing a most beautiful tune on the harp. After Rory Dall gained consciousness he immediately became aware of the haunting music being played by the fairies. He listened attentively and when he was confident he could play it he made his way back to the castle, where he entertained the guests with the first rendition of the air that was to be taken down by Jane Ross some 250 years later.

Denis O’Hampsey, another blind harper from the Roe Valley brought the melody down to the 19th century. Denis was born at Craigmore near Garvagh in 1695, lived in three different centuries and died in 1807 at the age of 112 years. Shortly after Denis’ birth his father, Bryan Darragher, moved to Magilligan to inherit the family farm. When only three he contracted smallpox and lost his sight. 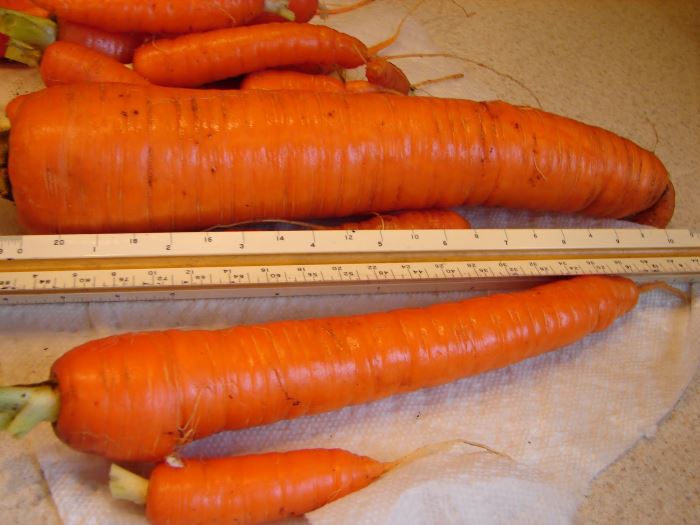 At an early age he decided to adopt music as a career and he commenced his studies under Bridget O’Cahan, who was related to Rory Dall O’Cahan.   Denis inherited a considerable repertoire from Bridget including “O’Cahan’s Lament”. Denis was to introduce this air throughout Ireland and Scotland as a result of his extensive travels in both countries.

It was George Petrie who gave the “Londonderry Air” its title in his compendium of Irish Music, the Ancient Music of Ireland, which was published in 1855. The melody was supplied to Petrie by Jane Ross of Newtown Limavady and he acknowledged her contribution as follows:

For the following beautiful air I have to express my very grateful acknowledgement to Miss J Ross of Newtown Limavady in the County of Londonderry – a lady who has made a large collection of the popular unpublished melodies of that county, which she has very kindly placed at my disposal, and which has added very considerably to the stock of tunes which I had previously acquired from that still very Irish county. I say still very Irish; for though it has been planted for more than two centuries by English and Scottish settlers, the old Irish race still forms the great majority of its peasant inhabitants; and there are few, if any, counties in which, with less foreign admixture, the ancient melodies of the country have been so extensively preserved. The name of the tune unfortunately was not ascertained by Miss Ross, who sent it to me with the simple remark that it was “very old”, in the correctness of which statement I have no hesitation in expressing my perfect concurrence.

George Petrie would have met Jane Ross when he visited Limavady on a number of occasions between 1833-35 to research and write accounts of the parishes of the Roe Valley as part of the Ordnance Survey Memoirs of Ireland. Little did Petrie know that Jane Ross would supply him a few years later in 1851, with a tune that would become world famous. It was appropriate that it was Jane who helped to preserve the air for future generations for it was her ancestors who, according to the lore, had been responsible for inspiring its composition.

It was in Ouray, Colorado that Margaret Weatherly came into contact with of the tune in 1912. Her husband Edward had abandoned his London medical practice in 1889 and emigrated to San Francisco. It was here that he met and married Margaret Anastasia Enwright before they moved to Colorado in 1908 as part of a gold rush to that area of the United States.

One day Margaret heard gold-prospectors, believed to be from the Roe Valley, playing a beautiful tune. She immediately thought of Edward’s brother, Fred, an eminent English lawyer whose spare time passion was writing song lyrics. She persuaded them to let her have a copy of the tune, which she sent to her brother-in-law in Somerset in England.

By an extraordinary piece of good fortune Fred Weatherly (1848-1929) had already written a song called “Danny Boy” in 1910 and it only required a few alterations to make it fit the beautiful melody he received from America. As well as writing “Danny Boy” Fred, a busy lawyer, managed to compose somewhere in the region of 1,500 songs during his lifetime including “The Holy City” and “Roses of Picardy”.

It was no surprise that Weatherly’s lyrics had an immediate appeal and went straight to the hearts of Irish people world-wide for Fred wrote “Danny Boy” with a view to bringing both traditions together in Ireland. In his autobiography Piano and Gown (1926) he expressed the hope that “Sinn Feiners and Ulstermen alike would sing his song”. His aspirations have come true for “Danny Boy” has become a neutral symbol of belonging and has been accepted by all denominations.

At the time of the song’s composition much family entertainment was derived from sheet music, and the seeds of “Danny Boy’s” success were sown in drawing rooms and parlours with families and their guests singing beside a piano. By a happy coincidence the gramophone was beginning to make its impact on the entertainment scene and “Danny Boy” quickly found its way onto gramophone records and in the ensuing years over 200 recordings were made of the song.

Here are some of our favourites, performed by a number of global musical heavyweights.

And finally, nobody does it better than the Muppets for St Patrick’s Day…

Let us know who has performed your own personal favourite, and why – add your comments below !